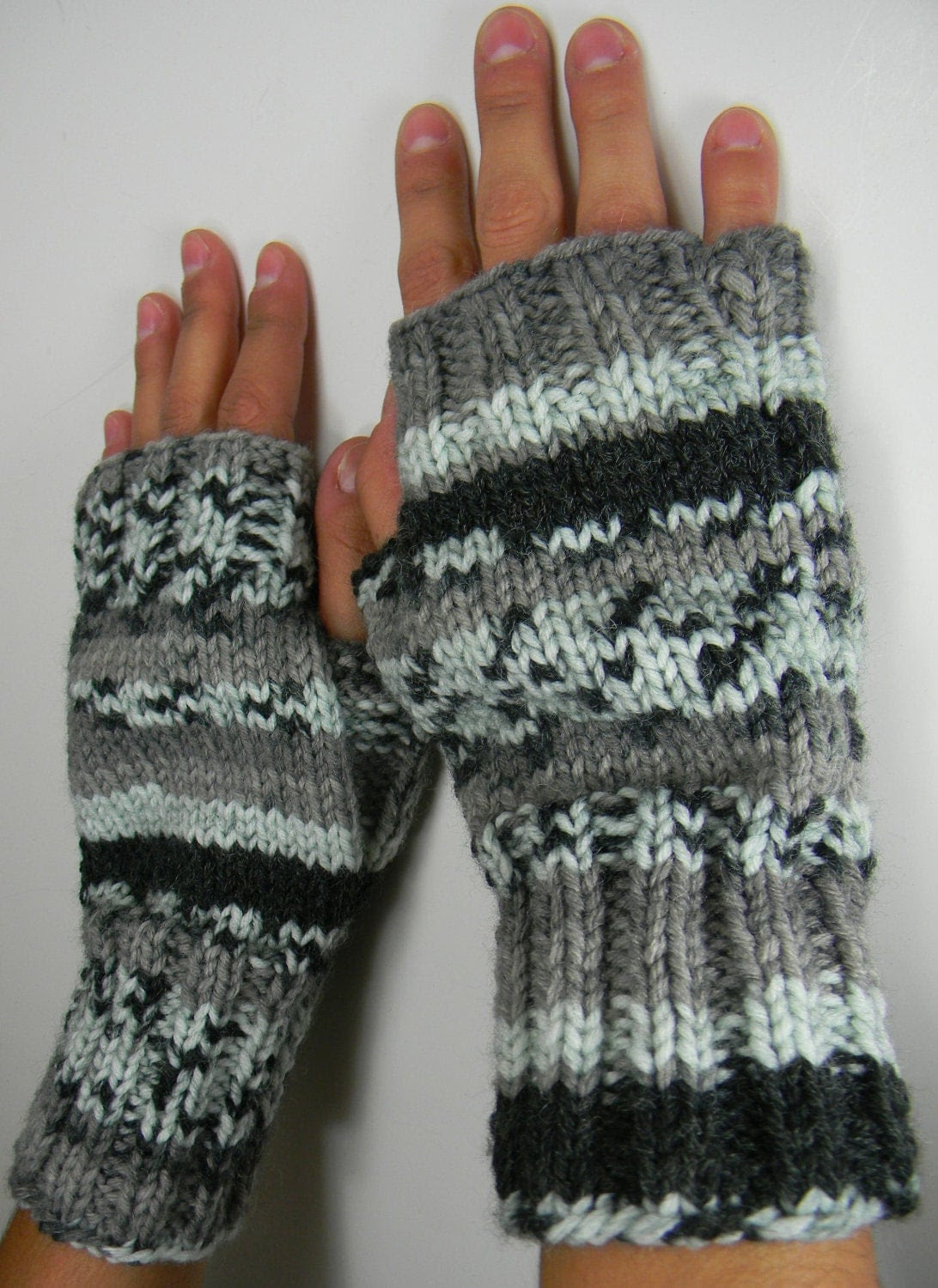 This is an easy pattern that can be adapted according to your skill.
I used worsted weight yarn and US 5 needles.
You need just over 50gms of yarn.
I also found that knitting them both at the same times ensures that they bout turn out the same !

You can spruce up this basic pattern by cabling the rib, adding bobbles, stripes etc etc
Enjoy!

Unknown said…
Fantastic pattern! Thanks so much! I'm still not an expert with 3 or 4 dpn's and tend to get discouraged. This will be a quick knit!
Sunday, November 20, 2011

Sue said…
I want to start this pattern right away, but reading through it, I'm just a bit confused. The row where you place the markers for the first time-k20, pm, k2, pm, k20. That comes out to 42 stitches, and we are casting on 44. Is this correct? Please help!!
Thursday, December 15, 2011

Anonymous said…
Wonderful find - quick and easy and just what my grandaughter needs. I have made 2 pairs with a yaarn with a wook content, and now making 2 pairs from mercerised cotton. Marvellous.
Monday, May 28, 2012

Highland Monkey's said…
Found your blog while hopping! I loved your gloves so much I made a pair myself. I hope you dont mind but I put a link to your page to give you credit.
Sunday, November 04, 2012

Anonymous said…
These fingerless gloves are so cute. I have made one pair for my sister. Thank you. I did have to make some adjustments, but this may have been because I am not a totally experienced knitter. I believe that it should be to cast on 44 stitches or 40 stitches...not 42. When I tried the 42 i was not getting the rib, I was getting the "moss" or "seed" stitch. You would need an even number of ribbing to create the ribs. Right? I used 44 and it turned out perfectly. But then I had to make some changes with the number of knits before and after the markers and the k2tog's.
Saturday, December 29, 2012

Anonymous said…
Right. But if you have 42, then you start and end with k2. But when you turn the work, starting with k2 again, you are actually knitting the purls and purling the knits, which creates the moss stitch. When doing a rib you have to knit the knits and purl the purls.
Saturday, December 29, 2012

lucinda said…
when you turn the ribbing you knit the purl and purl the knit - thats the way to rib.. i dont think i am understanding your question...

Unknown said…
I had another pattern which was mixed up and confusing - yours is much better. Have made 3 pairs and love them. Mine sat funny with the side seam coming across my little finger so make a definite left and right by deducting 4 stitches from one side of the increase and adding to the other.
Thursday, June 27, 2013

Unknown said…
Hey< sorry if this is a silly question< but how do you feel about people seling items made from your patterns while giving you full credit for the pattern? :D x (also if the products were made from a slightly edited version of your pattern?)
Sunday, September 15, 2013

Anonymous said…
appreciate pattern! can you tell me what the gauge is because i have lots of yarn with no labels on skeins, so want to be able to adjust needle size if needed. thank you very much...
Sunday, November 03, 2013

Johanna said…
Thank you for posting this pattern. I make a lot of fingerless mitts (which I am now calling "texting" mitts) for family and friends, from a two needle pattern which I created, and I am always interested in looking at other similar patterns. Yours is wonderful. Some of the comments posted here made me smile, remembering that all knitters are not starting off at the same place, some being beginners and others more experienced. We are all so fortunate when people like you freely share their expertise and make life so much happier for others. Many thanks again.
Thursday, November 14, 2013

Lilacrosesandthemoon said…
Thank you for sharing your pattern. It is most generous of you.
Saturday, January 18, 2014

Anonymous said…
Do not mean to be dumb Is cast off the same as bind off
Tuesday, June 10, 2014

dollmm said…
Wonderful pattern. Thank you so much for your generosity in sharing your knowledge.
Thursday, September 18, 2014

Anonymous said…
I am a pattern hoarder...but your 2 needle knit mitts have now moved to my 'continuous' folder!!! The pattern is fantastic n easy. I made a pair in 1 day...the only thing I will be changing is the thumb size..i need to make it just a little smaller. Getting ready to make another pair. thank you so much for sharing....I can't wait to make a whole bunch!! What a great gift!! linda
Saturday, September 20, 2014

Anonymous said…
Thank you for sharing this very nice pattern. It was easy to follow and the finished product is very nice.
Saturday, November 22, 2014

Anonymous said…
Hello I am a Dutch Grandma and made these for my granddaughter. Thans for this pattern.
Beatrice
Sunday, December 28, 2014

Unknown said…
I have made countless mitts from your pattern, thank you so very much, this is the only pattern I will use.
Saturday, February 07, 2015

Fingerless Gloves said…
You have selected a easy pattern for a fingerless gloves.
Wednesday, April 01, 2015

ellen mitchell said…
after you get the sixteen stitches for the thumb it says to knit the next two rows. should there be a pearl row after each knit row to keep the stocking stitch pattern and soyou will end up on the right side for binding off the thumb
stitches
Monday, November 30, 2015

Unknown said…
It is great to have the opportunity to read a good quality article with useful information on topics that plenty are interested on.

Curious cat said…
Love this pattern!!! Not sure how I understood the pattern better on first glove than second...but still love it. That part when you close up the thumb and knit on thr wrong side...but maybe it has something to do with knitting 2 rows before the cast off.....
Monday, November 21, 2016

myknittedcat said…
You can buy stitch counters at the store! Or you can use the extra yarn string from the cast on to remember which side is the wrong or right side!
Saturday, October 07, 2017

Anonymous said…
You do both at the same time on the same needle or in one day ? I'm trying to imagine doing the thumbs etc with two on one needle.is there a place that describes your technique for two at the same time ?
Monday, October 16, 2017

Unknown said…
Thank you so much for this pattern. I think I knitted about 25 pairs, some I sold and some I gave away but now I need to make myself a pair. I just love the way they fit on the hand, thank you.
Tuesday, October 24, 2017

Unknown said…
Is this what you looking for? Check out this blog, you won't regret.
best leather gloves for work

Imperial studios said…
Attractive patterns, I really like the pattern it was nice thanks for sharing.
high-quality leather gloves online

malaring said…
I don't get it. Do u add stitches on the Pearl row?? I don't get it as to how u put ur thumb through?
thanks
Saturday, February 09, 2019

Ahsan Tahir said…
Finger less gloves always be my choice. Looks beautiful and appealing in design And muay thai gloves are also a prominent and elegant gloves.
Thursday, May 23, 2019

Nonna Joanne said…
Hi Louise can you give me an idea of how many stitches and rows to vvonvert this pattern for my 10 yr old granddaughter. Have just finished knitting myself a pair. Love this pattern. Thanks for sharing. ☺
Friday, June 28, 2019

Anonymous said…
Absolutely love this pattern. I've made five pairs so far and I'm not stopping. Also gave it to a girlfriend and she's making all her girls a pair for Christmas.
It is a great easy pattern to make and give to the homeless shelters. That's my goal now.
Thanks for sharing.
Thursday, November 21, 2019

Anonymous said…
I've reached the "k2 rows then with right side facing K20, bind off 16, k20." Two questions - 1) do I really knit 2 rows or should it be stockinette? 2) what happens to the existing 16 thumb stitches? Thank you - I know I am missing something!! Rebecca
Wednesday, December 11, 2019

Anonymous said…
If I want to make this for a man, What size needles and how many stitches would you recommend?
Thank you
Thursday, January 16, 2020

Addison said…
Really very happy to say, your post is very interesting to read. I never stop myself to say something about it. You’re doing a great job. Keep it up
Check my blog
See it here

Anonymous said…
I'm looking forward to knitting these mitten for a couple of kind friends. Thank you.

It looks funny when I do it as written. Also, after the thumb closing, you write K6 more rows. Again, that is not stockinette stitch.

I will be making the 2nd glove the same as the first, but the next pair I will rewrite the pattern.

Anonymous said…
Anonymous wrote: It looks funny when I do it as written. Also, after the thumb closing, you write K6 more rows. Again, that is not stockinette stitch.

I followed the pattern as written and after the thumb, you get a 6 row pattern, then finish with ribbing. I like the way it looks but have to say that even with smaller needles (clover 4) and lighter yarn, I have a HUGE glove. Way too big for my hand. I will do the second, but will probably have to give the pair to one of my sons and use fewer stitches or a different yarn for me.

abc assignment help said…
My Assignment Help online is the most recognized and preferred one stop solution for students to get professional my assignment help in any subject in Australia. Contact us now to connect with our experienced writers and score outstanding grades in your concerned subject.
Monday, June 07, 2021

Popular posts from this blog

April 04, 2011
By Popular Demand! This is in one size only - takes for ever to figure out other sizes! For chest 10" - finished measurements about 14" Sleeve 3" You will need: 2 balls of a soft yarn that woks with 3.25mm (US 3 Needles) A button tension is 25sts and 50 rows for a 4x4 inch square If you are a beginner you may not understand this pattern - for more experienced knitters, I am sure you will see the 'pattern' of the decrease rows forming the raglan) I think this was originally a Debbie Bliss pattern i had written down somewhere so please forgive me if there are any mistakes - as i keep saying, I am hopeless at writing down patterns and i just had some notes on a scrap of paper! Back cast on 45 sts knit until back measures 3" ending with a wrong side row cast off 4 sts at beginning of next 2 rows leave remaining 37 sts on a spare needle sleeves (I  knit both at the same time) cast on 29 sts K 7 rows increase:* k3, m1, k to last 4 sts m1, k3
62 comments
Read more